Posted on February 8, 2017 by storiesbygary

The Sky’s the limit!

Building on the waterfront of the Caribbean encourages one to consider just how you will situate your new house. You do have options, building directly on the sand, raising it up a few feet, or raising it up a whole bunch of feet. Depending on what material you will be using to build has a lot to do with your decision.

The one thing you need to remember is you are in the path of hurricanes, swells, and flooding. On the Placencia Peninsula, not that many years ago, a hurricane pushed through and a six-foot swell washed over narrow portions of the peninsula. That’s exactly what happened on my lot. In previous years, major hurricanes actually picked up wood homes and moved them. I have been told that many of these homes, like in Placencia, remained where they landed, and the household just moved to the new location.

When we made our decision to build, we took that into consideration and decided to not only have our guest cabana up off the ground but also our new house. The cabana ended up sitting on wood poles with concrete bases, about seven feet above the ground. 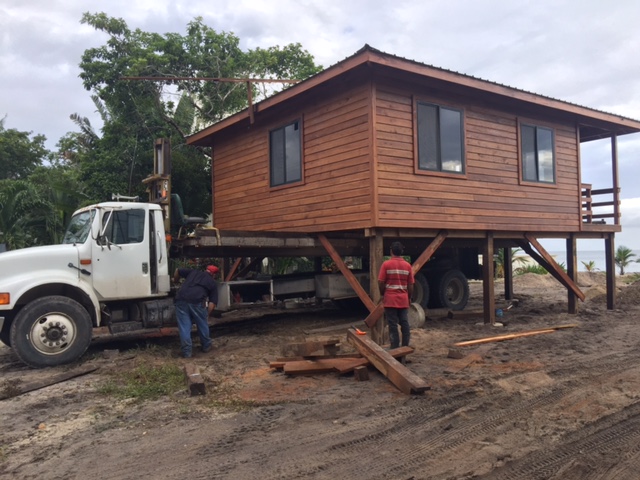 Our main house will sit between ten to twelve feet above the ground. This will have multiple purposes to us, of course, the main one being potential flooding. The second includes security and limited access to our home. Nobody will be climbing through our windows on the ground floor. Having the base of the house that far above ground will also help out with the crawling insect and reptile issues of Belize.

Three times lately I have heard neighbors talking about the snakes showing up in their yards and trees, and I’m not talking small snakes. Two neighbors reported 6-8 foot pythons, and one an undetermined snake.

We also have scorpions, tarantulas and as most visitors know, skeeters, noseeums, sand fleas, and other biting insects. If we can eliminate even half of these by raising the house, and responsible spraying, it will make our life much more pleasant.

So, this week it was time to “go vertical” with the house. The crew started attaching wood forms around the rebar cages in preparation of pouring cement into the top, some 12 feet in the air.I was fascinated watching as the lined them all up perfectly straight, not using 6-foot levels, but instead an attached stick at the top, and a hanging plumb bob!

In my mind, I pictured a “pumper truck” with a massive flexible hose that would reach up to the top of these towers to pour the concrete.

The guys set up the small portable mixer, water hose, and started shoveling the mix into the mixer. They built a wood formed bin on the ground and poured concrete into it. They then proceeded to shovel concrete into six-gallon buckets and carry to each column, hand it up to a guy on a platform, who poured the concrete into the tower.

This procedure will be repeated for all 20+ support towers.

So who needs Jenny Craig or the local gym?

Last night another massive delivery of steel rebar, in preparation for the next step in the build, going horizontal with the concrete forms. Just wait until you see how they are supported?

Cheers everyone, and thanks for following.