Building our new home in Belize, the good, the bad and the horrible

“One thing you will learn about doing anything in Belize, you will never stay within any timelines.” 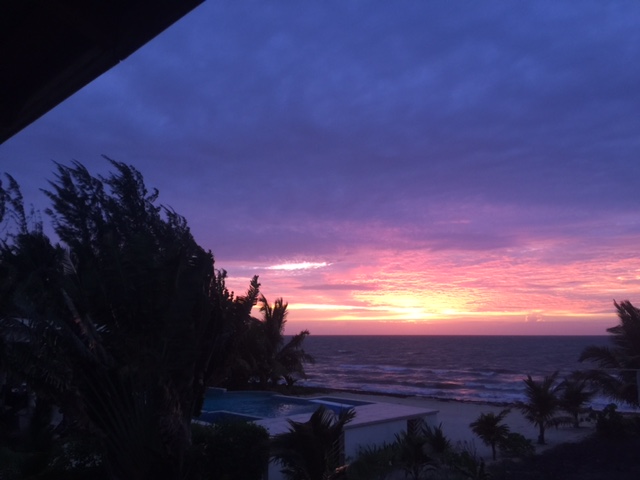 Morning view from the deck

The guys have been pretty busy this past week or so, building the concrete storage/security room under the house, and putting the finishing layer over all the concrete columns and beams. It’s pretty amazing how things are done here in Belize. I watched as the crew went over all the poured concrete and chipped them with tomahawks! OK, well…actually hatchets. I just wanted to get your attention. 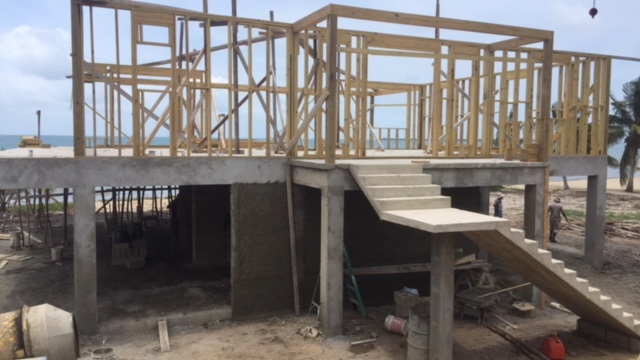 Next, they got special sand delivered, a massive dump truck full, which they then sifted thru a screen, and mixed with cement. They would then fill a homemade “palate”, and scoop a trowel of this liquid pure cement up and throw it on the columns. Now that may sound messy and easy, but trust me, to have it land and stick correctly, there’s an art to it, which includes a special “flick” of the wrist.

All the forms have been removed from the front and back stairs, and I really love the single column supporting the landing on both front and back.

The security room is pretty much finished, with the exception of final finish on walls. The guys have completed the double door entryway and the window. We will be installing a pretty heavy-duty solid set of doors, and the window will enjoy custom steel security bars.

The secure concrete “storage/security” room under the house.

Its finally at the time when the roof is the next major project to raise, I looked out the front door of the Cabana last week and saw the guys erecting these longboards on top of the walls, to sort of a point in the middle of the house. When I asked the foreman what they were for, he told me to walk on while building the roof! They were Belize scaffolding, which I will be mentioning again shortly. hen they were completed, I watched my foreman walking on them, thinking to myself “balance pole anyone?”. Keep in mind that he is walking the plank, about 15 feet in the air, above a concrete floor with tons of rebar sticking straight up!

So the next thing we need after the scaffolding is the special beams being cut special order from Belize hardwood at the mill. Kevin had told me they were delivering it last Thursday or Friday. While waiting for the guys proceeded to build more scaffolding all around the outside of the house, about 20 feet high, as the main floor is about 12 feet in air.

Tall scaffolding along sides of the house

So Monday and Tuesday go by, and no lumbar from the mill. I hear from my then “builder” that the mill had an equipment failure, as in broken plainer. They hoped to get it fixed and have the wood here by Wednesday or Thursday. The crew is getting a bit nervous as they know the rain is coming soon, and they really want the roof up before it starts again.

So to avoid a day-to-day rundown, today is Sunday, and here comes the truck!

As I watched the guys unloading beams, some over 24 feet long from the flatbed, all I could think about was the fact they would be lifting those beams twenty feet above the main floor to build the cathedral ceiling! Back in the U.S. the crew would have unloaded them with a skid steer and raised them with a crane!

So now I can tell you about “power” / electric in Belize. I have often heard about loosing power here, but over the past 6 months, only lost it a couple times, not more than a couple hours. Until this week, when we lost power at 5 PM and it was out until midnight! Needless to say, with the whole village in a blackout, both Oliver and I were shall we say, alert? When the main house is complete it will have a whole-house butane generator hooked up to the panel which will continue running everything. But for now…what to do?

Just a little scenery from my trip to Spanish Lookout to purchase the generator.

So, the next step is raising the roof. I’ll be back!