Building our New Home in Belize, the Good, Bad and yes Ugly !

A lot happening all at once, AC Units installed (no electricity yet), steel laid under house for concrete, and “re-model” of new home going well 😉 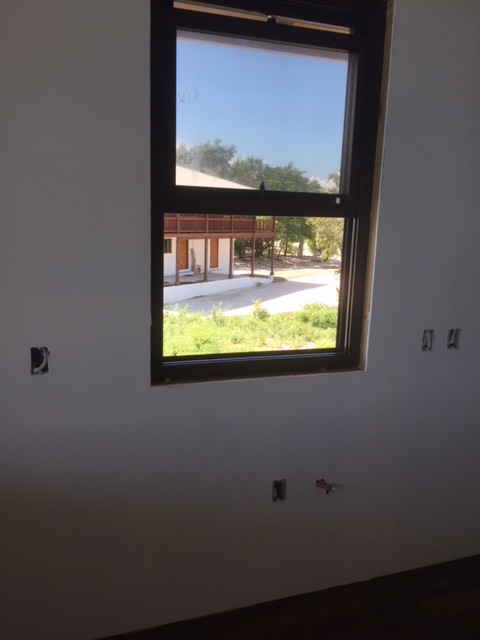 We determined there was no way a standard range would fit under this window.

When I left of in the last post, we had discovered a planning / architectural issue with a window placement in the kitchen and the range placement. It was decided that in order to actually install any standard range in the only place available in the kitchen, the window had to go. So, out it goes, outside siding was removed and new staggered siding needed to be installed, so it didn’t look like we did what we did. 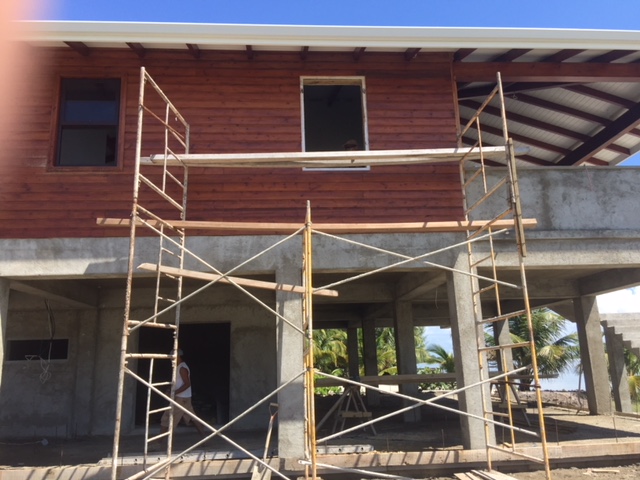 The window is removed, ready to re-do siding.

The kitchen wall inside is now inside framed, so we can run electricity to the area above the range where the venting microwave will be installed. Now, this actually is an improvement over the original plans, where the only way we could “vent” the range was by opening the window. Now if anyone in this household, meaning Marsha and myself, ever burned anything in or on the range, we would vent out the window. right? Wrong! We live on the Caribbean, and I mean right on it! The majority of time the wind will be blowing in, not out! That means the smoke would be blown into the house, not out. 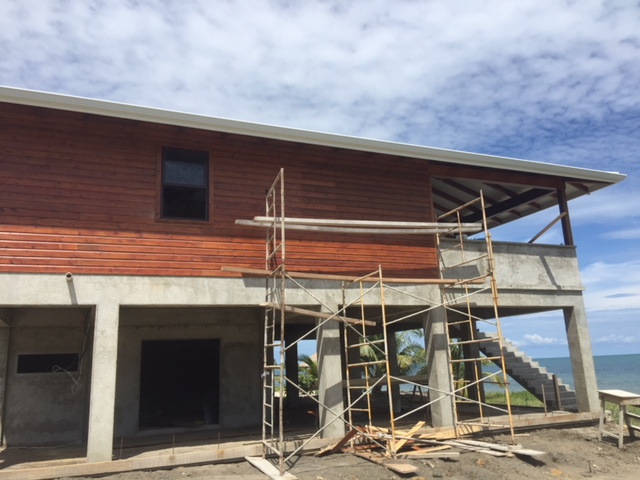 Helpful advice if building a new house in Belize or anywhere actually. Double check all measurements on your architectural drawings, and match them against appliances, furniture, cabinets, counter heights, window heights, and everything else. Being “on-site” during construction is key to your success. Remember the shower head ? If I didn’t notice, the roofline would have dropped a foot, and I would have hit my head on the shower head. 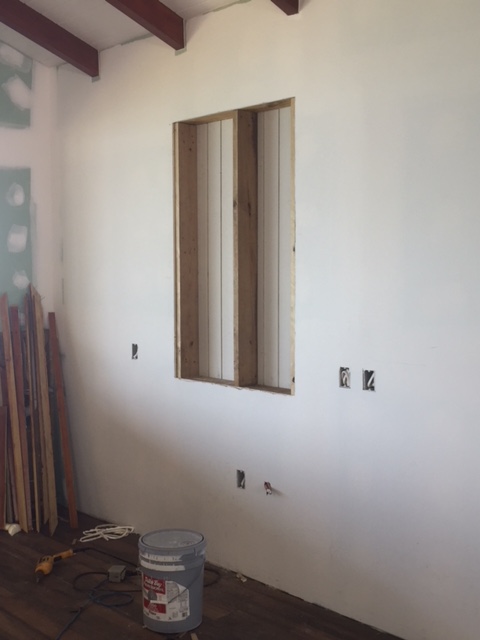 Inside ready to install electric box for microwave, vent to outside and the sheetrock.

In fact, almost every day, the on-site crew comes to me with questions on how I think different things should be done or installed. If I wasn’t here, they would just “wing it” and I would find probably find out the error of their ways.

So, moving on, I was happy, and I just know Marsha is thrilled that the Air Conditioning guys showed up and started installing the A.C. blower units upstairs in the great room and bedroom. Next, they worked on installing the actual main units down under the house where the whole house generator and water pressure tank are to be installed. 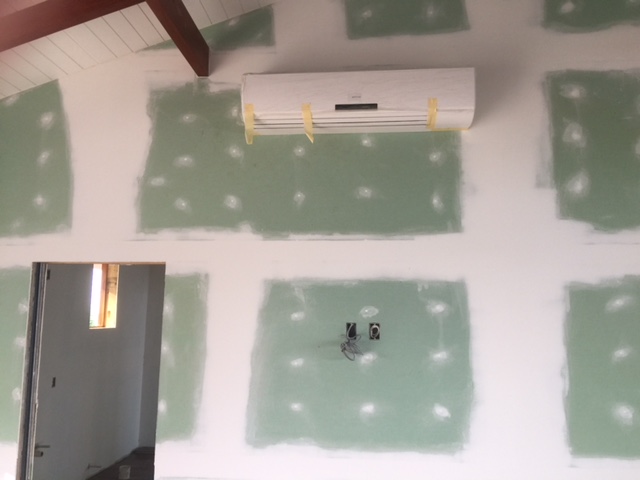 And then I woke up this morning, and watched as the guys were laying the steel fencing on the ground under the house before pouring the concrete floor tomorrow. Suddenly I had a flashback to the afternoon before the main floor was to be poured with concrete. Remember that? I realized that none of the plumbing pipes or gas lines were installed from below up through the soon to be cement floor to the laundry room. This was a pretty big “oops” then, and I felt another “oops” moment coming again. 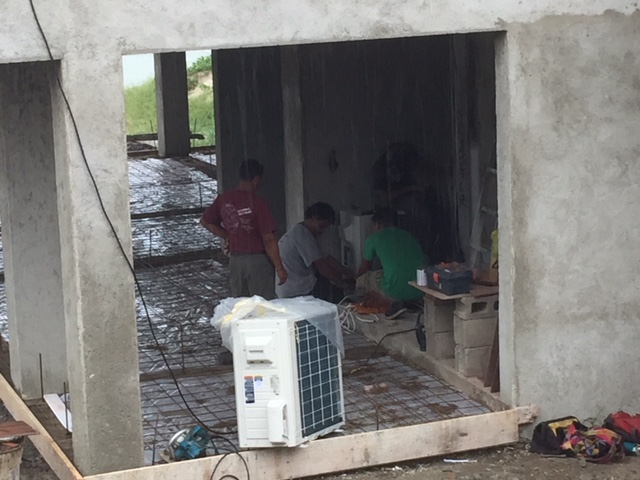 Installing main AC Units. WTF? How is the water and electric lines getting un after they pour concrete floor?

I asked my site foreman, Riggo, if the poured the entire concrete floor  under the house, how were the water, power and cable lines running underground, going to get under the house to hook up later? Yep! Another “”oops” moment! He said he would discuss with the plumber and electrician when they got there.

Now understand that I have a “little” experience with plumbing and electrical installation, being I maintained our 25 acre ranch in Oregon, with three pump houses, and miles of underground electrical and water lines.. So I suggest drilling holes thru the forms set up to hole the concrete in place, near where the tanks, pumps and electrical needed to come in. Then they could run plastic conduit lines thru the holes from outside, under where the concrete would be, and up to above floor level, for connecting later. 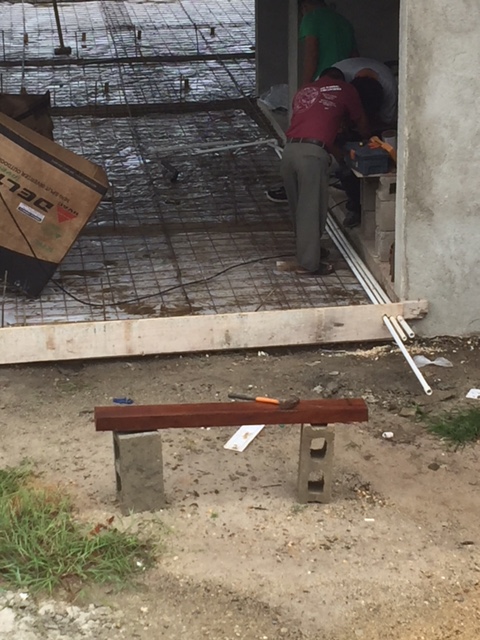 Utility problem solved !Conduit installed for underground utilities, under where concrete will be poured.

So, tomorrow they tell me the concrete truck will arrive and pour the floor. The Plumbing lines should be installed completely under the house, so we bypassed that issue. The custom double entry doors and underneath security room doors should be arriving by next week. All the house windows have been installed, except the three windows they forgot to make and deliver. Not quite sure when we will see them. 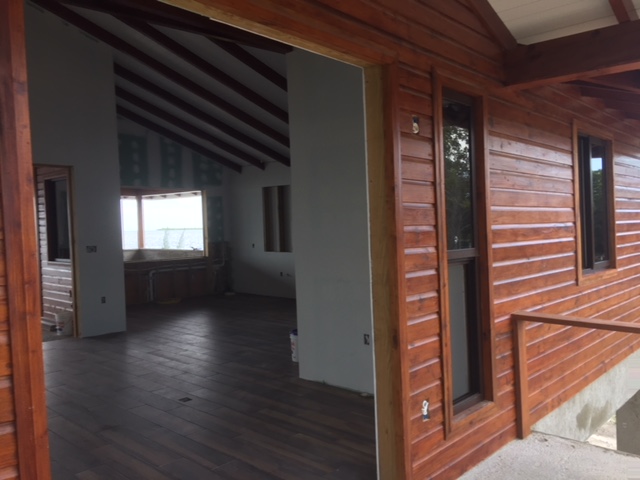 All inside floor tiles installed.

The floor tiles have all been installed inside the house. Next the floor of the outside deck and front porch deck will be “floated” to even them, and tiles continued installation on them and the stairs.

One thing I will say, choosing a builder that has a good reputation, a lot of experience and you can get along with is key to your success. The down side to that, is especially here in Belize, he is the only one that actually know what he is doing, and communicating that to his Belize workers at times is difficult. Add to that the fact that contractors like Keven, are very busy, on multiple job sites, and can at time get shall we say, “confused”? They do have a lot on their plate. So, it’s you job, yes your job, to stay on top of things, every day.

Stay tuned to my next blog post, where I will discuss this a bit more, and it has to do with this picture. 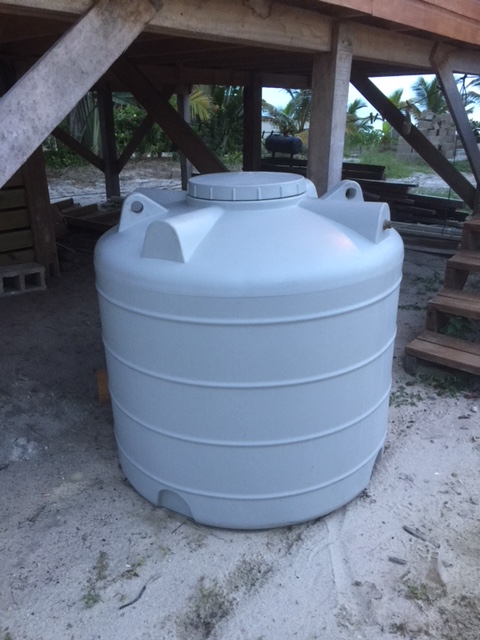 Everything seems to be coming together, and my foreman said they were told to get on track to being finished before the Christmas holidays.

Let’s see how that goes for us !