Posted on December 4, 2017 by storiesbygary

The excitement of my last post about large folding glass door and folding kitchen window, has changed to…yes…the bad and possibly ugly!

In the last blog post you probably felt my relief and pleasure at finally having the specialty folding glass door from living room to deck, and over the kitchen sink to cook center arriving and ready to install. Keep in mind that these were special ordered from a supplier in Guatemala, who kept promising over a month every week to be installing them. That feeling of joy only lasted a couple of days until I learned that they were both completely wrong! 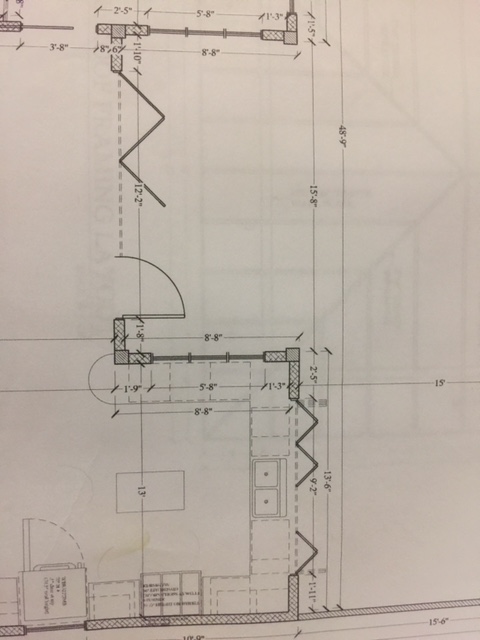 As you can see by the official architect drawings, done by my Architect Tracy, the large glass folding doors needed to fold outwards onto the deck. The single door in them needed to be on the right, or kitchen side. The way it was installed it is opposite, and when open blocks entry to bedroom. 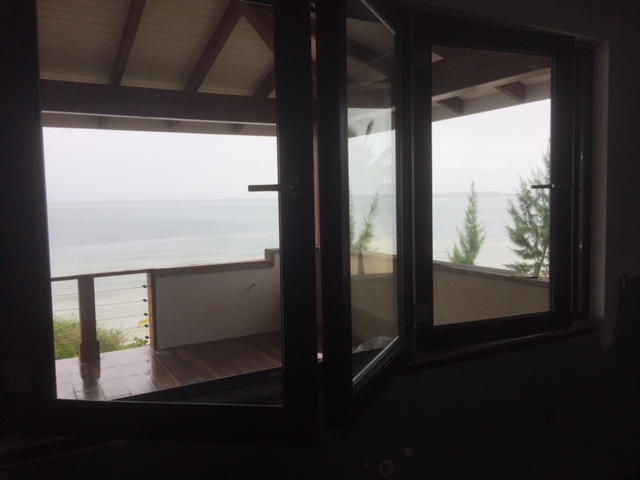 The kitchen window was to actually be six (6) small panel windows, also folding outward, so as not to interfere with sink and faucet as per architectural drawings. As you can see, they instead installed a folding glass window, which folds instead, three (3) large windows inward.

My cabinet maker Conrad was the first to notice and raise the “oh crap” flag, telling me it would interfere with the sink and faucet install. This was immediately followed up by my Architect, Tracy Atkinson, telling me and my builder Kevin that both the large window and door were “un-acceptable” and needed to be corrected. 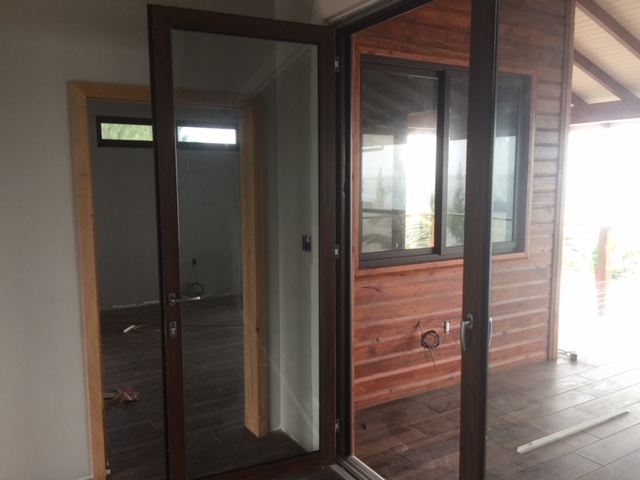 Bringing this issue to the attention of my builder Kevin, he came out to the building site to look over the window/door situation with me. The first thing he said was that the installer had told him the large glass folding door would be installed with single door to the right.I questioned whether the installer had actually installed it backwards, with possibly a semi-easy fix. Kevin also acknowledged that the kitchen folding window was ordered as a “six-panel” folding window, folding outward, not three large windows folding inward. 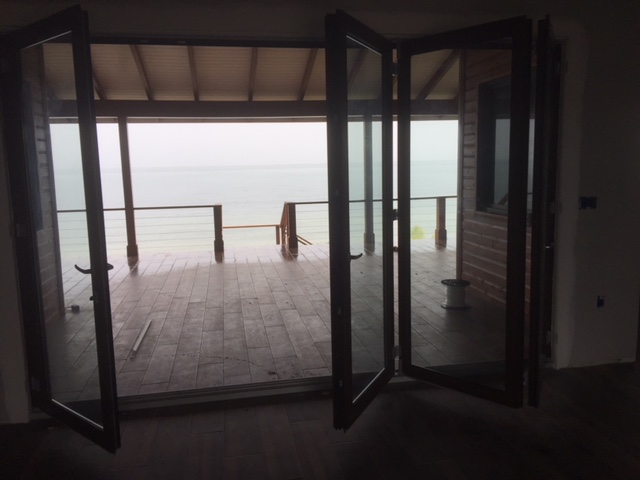 As you can see, the whole folding glass door folds inwards.

Of course, you know in every story, there is always “one more thing”. If this wasn’t bad enough, the sliding door for the bedroom to deck had also finally arrived, after a month of waiting. My lead guy on site installed the sliding door, of which I was thrilled to have happen. Marsha and I had gone back and forth on either a French door or sider, and finally went to look at sliders installed in another of Kevins house builds. The owners were thrilled with their sliders from Peter’s Glass in Spanish Lookout, and testing them we were very impressed. 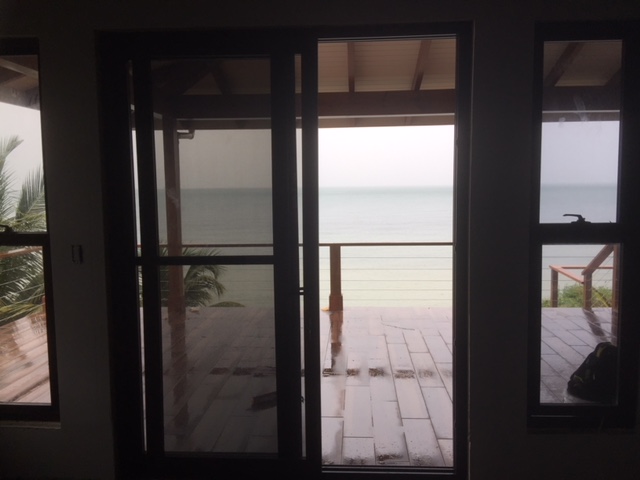 This is what I call now, our “workout sliding door” because its quite the workout opening or closing.

So when Rigo had completed the install, he called me from the Cabana and said he had something to show me. I’m thinking a beautiful sliding glass door, right? Silly me!

He called me up to the bedroom to show me you needed two hands to open or close the door! It felt like it was rubbing on itself or something. I told him I would have Kevin take a look at it. So, after having Kevin look at the two other issues, I introduced him to a third, which he said he would look into.

So, two entirely different glass companies, both offering what I would say are major problems, with very costly items, have caused my grief, and I’m sure you would too. 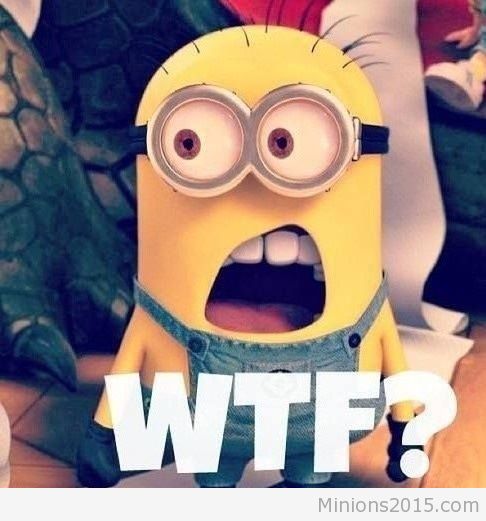 That very day Kevin copied me on the email he sent to the door company in Guatemala, in which he explained everything, that both system was installed inwards and was supposed to open outward. Also the kitchen folding window was ordered as six small not three large windows. He also mentioned something else I pointed out, there is no lock on the kitchen window so anyone can open it from the outside by turning handle, as well as no keys for living room door lock.

He also included a copy of the Architect drawing that he had originally sent them when he ordered the two units. He also stated these both need attention right away.

They said they would send someone out today (Sunday), and it’s 11 AM, nobody yet ! Will give update in next post. 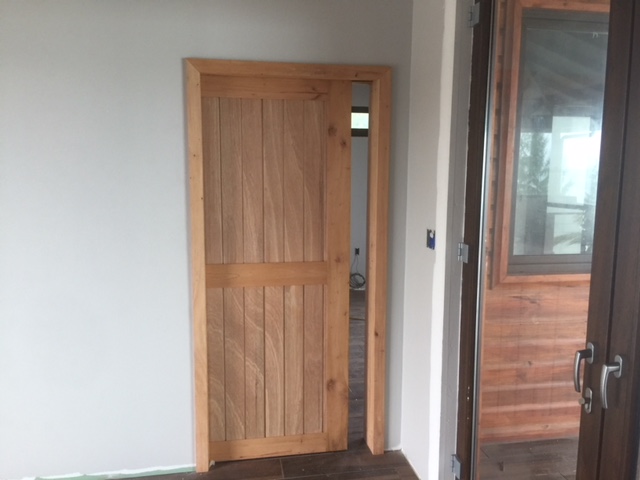 One of three pocket doors, this one is to the bedroom.

I want to end on a good note here, with the install of our “pocket door’s yesterday. For those that do’t know, pocket doors don’t swing open, but instead slide to the side in a “pocket” in the wall,They are really a space savor, and offer more open wall space. I will also say that I am really impressed with these solid wood doors and paneling.

As I have said before, selecting you builder in Belize, as quite honestly anywhere in the world is and should be a hard decision. Builders are at the mercy of their workers and suppliers. What makes things so much more difficult here in belize, is language barriers, supply and demand, and finding reliable and quality workers. Many of the construction precesses on our home, are being done for the first time for some of my workers. There are processes in construction that have to be shown and taught to the workers by Kevin before they can proceed.

All in all, I am very happy with the construction of our home here in Belize. However, like I have said before, again and again, suppliers are on their own time, may not understand what is asked for, or possibly just build wrong. It’s really up to you if and when you decide to build a house here in belize, do you need to be here to oversee the building of you home?

I’m glad I decided to.

Looking forward to updating you all with major improvements and satisfaction on our next  meeting. Until then, remember, it’s been tough being here throughout this entire building process, but I’m ever so happy I have been here for issues like these.