Building your New Home in Belize, the Good, Bad and Ugly…Final Chapter

Posted on September 10, 2019 by storiesbygary

The voyage has been long, but the end is in sight.

Hello, my friends and followers, who have taken the exciting (sometimes not) voyage with me, building our new home in Belize. Although it’s been a long one, starting in November 2016, and here it is September 2019, the journey is ending. When they gave estimates on how long it takes to start and complete a home build, I kept hearing a year, maybe a year and a half. I decided for me, it was the time the process started, actually on the ground, until everything in our certified house plans was completed.

That has finally happened this week. 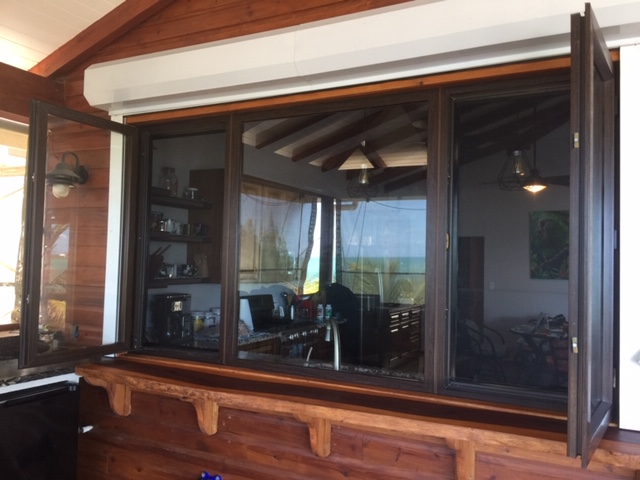 The right window installed after 2 years of bullshit!

Just to refresh your minds on that one thing that kept us from completion, the multi-panel opening kitchen window. The first “builder” who in actuality was just a “general contractor”, ordered and had installed the wrong window. That one folded open inward and we have never been able to open it because it hit the lights and faucet. That one as well as the 2nd that was ordered to “correctly replace it” were ordered from foreign countries, expensive and took a very long time. The second that was ordered from Bennies in Belize City finally arrived, and they built us a special door instead of a window. That was sent back and we searched options with our actual builder, Nelson Montalvo.

The old window that “other guy” ordered and had installed, so wrong!

Finally, we discovered on our own, that Peter’s Glass in Spanish Lookout was now making the hurricane folding windows. Yipppppppeeeee! We had their install guy measure for the kitchen window at the same time he measured for our new hurricane shutters, for that window and the two large doors facing the sea.

And then the day came this week, and Franz from Peterson Glass showed up with our new window, installed it and everything was peachy keen, finally. Well, almost. You see, for a year, the matching granite countertop that was cut as a counter for outside the window laid on the back deck. Not such a big deal, but every time I looked at it I saw the $1000 U.S. it cost and we had never used it. My site foreman building the house, Rigo who is now on his own as a Contractor/Builder, had his guys build the structures under to support the heavy counter under the window. 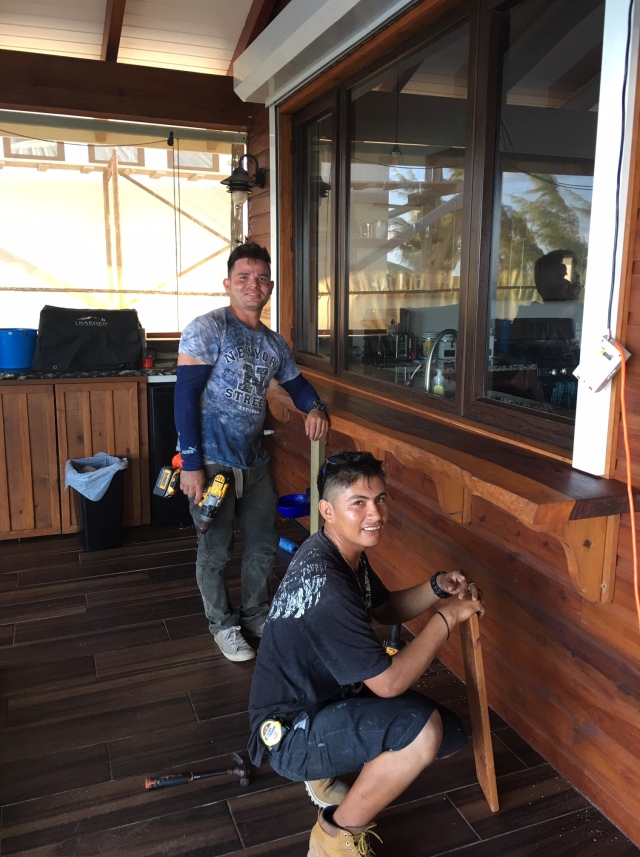 As they were picking it up to install it, it slipped from their grips and shattered on the tile floor.

So, what to do? Should I have Rigo spent $1000 of his money to replace it? Nope, first of all, the granite store had no more of that stone. So, Rigo suggested maybe putting in a custom Belize hardwood counter that he and his guys would create. He traveled to the Mayan Mountains with his father and found a beautiful Purple Heart Tree. Long story short, I am more thrilled with that creation and counter than the originally planned granite counter.

Pictures just don’t do this counter justice. What an awesome end to the story.

Rigo would not take a dime for the new wood counter.

So, our house is now, 100% complete and this blog is officially ending, and as I speak, being finally edited into my new book, Building Your New Home In Belize, The Good, Bad and Ugly. 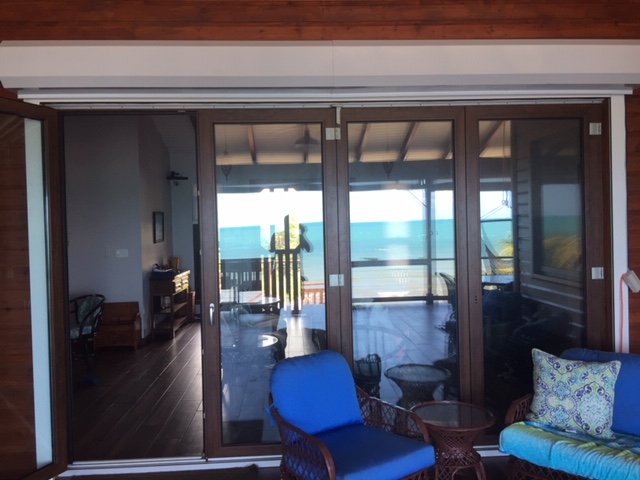 The white above the door contains the rolled-up metal door that rolls down at the push of a remote control button. Seals house from hurricane and vandals.

A couple of extra notes on things we have done to the house, one you have already seen, the Hurricane Storm Roll Windows from Peters Glass. These are the same as I used for the garage under the house, which open and close with a mounted control, or hand remote. I also had Rigo make wood framed metal roofing covers for all the windows on the house and cabana. They are all identified, take 4 screws to install, and can be totally installed in an hour.

My new garage for “The Beast”, guarded by my crew member.

We have also found that living on the sea will rust everything, including brake calipers and ignition systems. Because I found out the hard way, I am replacing all on my UTV, and we had Rigo build a separate small garage for it under the house. It will also protect our water pump/tank and AC units from the sea air as well. 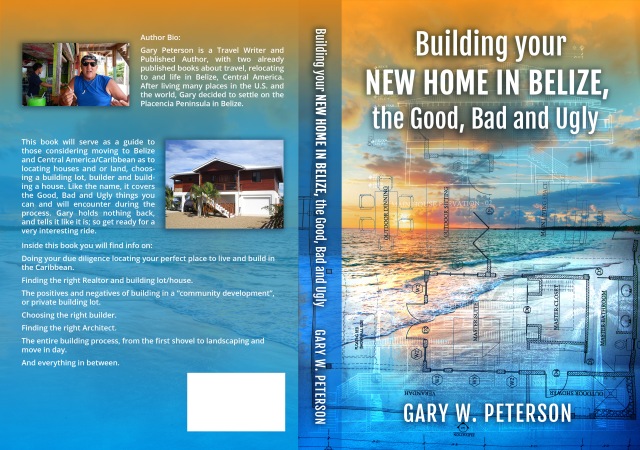 Will be available hard copy and eBook, Amazon, Brookstone, and direct on Belize Expat Site.

I will close this chapter of my life with the hopes that some of this has helped at least one person. I also hope when I publish my book, it will help many. It will also include things like contracts, loans, utility companies, where and how to get building and household supplies and much more.

Thanks for taking the ride,

1 Response to Building your New Home in Belize, the Good, Bad and Ugly…Final Chapter