Spending Thanksgiving on a “Deserted Island”

Posted on November 24, 2012 by storiesbygary

“Was the morning after Thanksgiving and all through the house, memories of a wonderful, relaxing Holiday, just me and the spouse”

There we were with just the two of us, and of course the “kids”, two Rotties, three horses and “kitty”, and a whole day of relaxation, and may I say much needed. We had bought a 14 pound turkey, and my task was to cook it for the first time in my new Traeger smoker barbecue. My other job was wine, which is never a problem for me.

The day was to be dedicated to relaxation, Thanksgiving Day Parade and of course the National Dog Show being held in Pennsylvania, while sitting in front of a roaring fire, thumbing through a ton of magazines looking for “Black Friday” deals ! 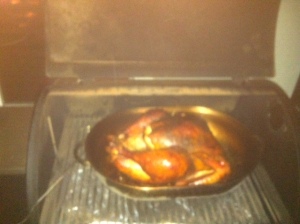 Now the wife had a great idea for the turkey this year, after totally enjoying this years turkey, I have to pass this on to you. She took this seasoning shake called “Slap Y’r Mamma” which we got at our local Farmers Co-op, grilling aisle, and added it to a stick of softened butter, and fresh basil. She then separated the shin from the breast meat, and rubbed this into the bird between skin and breast. Later after baking she used the drippings from this for her gravy, and it was killer.

Anyway, about cooking with a real barbecue, let me tell ya, slow smoking / baking in this Traeger, which feeds flavored pellets, in this case, cheery and apple, put a fantastic smoke on this bird. I slow baked it for seven hours at 300 degrees F, and it was perfect, moist, full of flavor. My hint ? Make friends with someone who owns a Traeger for next year !

Now for the wine choices for the day. I put a smile on the wife’s face when I brought out the bubbly and orange juice for some morning mimosas, while she made from scratch, her ableschievers on the stovetop. For early afternoon while watching the dog show, why a superb Merlot from Abacela Vineyards in Roseburg, Oregon.

With our turkey dinner, I did exactly what I have often prescribed in my posts and articles on what wines to serve with turkey. Most wine “consultants” will immediately go to a Pinot Noir, and living in Oregon with IMO some of the best Pinot Noir in the world, I had plenty of great choices in the wine cellar. However, with the apple / cherry smoked lusciously moist meat, my choice was a bottle of 2011 Kim Crawford Sauvignon Blanc from New Zealand, and did it ever complement that bird !

Later that evening relaxing by the fire, pleasantly satisfied, with smiles on our faces, I left the room for a moment, and returned with 2 “sippers” and a bottle of 2004 Abacela Estate Port that I had been hiding in my wine celler for a special occasion.

As wonderful as our experiences with family and friends, on holidays, or anytime, there is just a wonderment of satisfied pleasure to spending time with the love of your life, alone, just the two of you on your own “deserted island”.