Posted on November 25, 2012 by storiesbygary

The room was built for creation of an environment supporting voice as well as musical instrumentation, with acoustics shall we say perfect. The quilting that hung strategically on the walls, placed there for the sole advantage of withholding the sounds. With a stage complete with low ceiling and a fireplace, one would question how this cathedral room could produce the sound of the alto voice I heard as I entered the room.

I had just arrived for the Thanksgiving musical event hale at MarshAnne Landing Winery in Southern Oregon, and the voice I was hearing that of Siri Vik, an accomplished Alto Vocalist, who has preformed throughout the U.S, as well as London and Italy. Accompanying her on piano, Nathalie Fortin. born in Montreal Canada, now living, performing and teaching in Eugene Oregon.

I was here to enjoy their musical event this evening, “A Night at the Cabaret”, one of the musical events held here at MarshAnne Landing Winery by Greg and Fran Kramer, owners and Vintners.

Greg had invited me and my lovely wife Marsha to arrive early, so that we could enjoy a private barrel tasting of the wines aging below the building in the cask room. Greg had excitedly told me that I would be pleasantly surprised by a couple of his wines in process. Upon arrival an hour before opening, and after being introduced to Siri and Nathalie, we proceeded with glasses to the cask storage room.

The next hour was spent tasting some very remarkable wines, some I would have voted on bottling right away, yet realizing they would only improve in their French Oak casks. I can’t talk about some of the wines we tasted, until of course they are bottled, aged and available for sale. I can say that as usual, his vintage of Syrah will put a smile on many a set of lips, and grace many glasses. His Cab Franc will do the same, but it was his Cabernet Sauvignon that I was the most impressed with, as it brought my palate back to my days of my first love, Northern California Cabernet Sauvignon. It was a delight, with forward fruit, medium tannin and at this early stage, a length that had me thinking of this wine through the evening.

I would tell you to keep an eye on MarshAnne Landing for some superior wines being released soon. And, if you have the opportunity to sip or purchase his Chardonnay, don’t miss the experience.

Now for the concert, which I would say was excellent. Siri and Nathalie performed Cabaret productions from the 1940’s and 50’s, all in French. Te way Siri presented each individual song she was about to perform, was to explain the story behind it before performing, and as you watched and listened, you understood what she was singing about. Did I also say she performs as an actress, so you not only listened to the song, but could physically see it in her expressions and motions.

I will admit that on multiple occasions, I was the first to my feet with an ecstatic “Bravo”.

If you ever have an opportunity to attend one of the musical events at MarshAnne Landing, you would leave feeling quite satisfies. His kitchen staff supply some fine food for snacking, and wine can be purchased at the wine bar. FYI, I visited the wine bar twice, once for a bottle of their excellent Cab Franc, and once for a bottle of Syrah, to share of course. 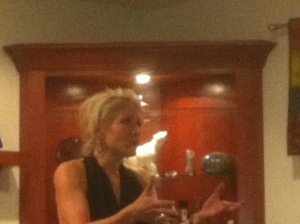