Building our new home in Belize, the Good, Bad and yes Ugly that happens.

For many months now I have talked about the folding door to deck, and folding kitchen window to the deck and cook center. As you probably remember, they were both terribly wrong, both in the specification as well as installation. The bottom line was, for months I said the big folding door was installed backward, and could possibly be turned around, opening out to the deck. Additionally, when they installed it, they didn’t leave keys, so it couldn’t be locked or unlocked from outside. Our biggest concern was “Hurricane Spec’s)” specify doors need to open outwards, not inwards, so they don’t blow in.

The large folding kitchen window was just ordered wrong, and not to our architect’s specifications. It had three large panels instead of the six that was specified, and it opened inwards over a sink, instead of outward over the counter. Adding insult to injury, if you tried to open them, you would hit the faucet as well as overhead lights. Add to that, there was no locking system, inside or out, so anyone could open from outside and crawl in. Not at all acceptable in Belize.

These doors and windows were ordered and installed by a Guatemalan Company. Over many months when we asked our former General Contractor about getting them fixed/replaced, he told us the company wouldn’t respond to him. Finally, he did tell us that he didn’t think they would be doing anything about either of them

So, fast forward a few weeks to present. Marsha and I decided to take over as our own “General Contractor”! We contacted Benny’s in Belize City, who sent their window guys down to see what was up with our door and window. They found that indeed, I was correct about the big folding door, and would schedule their installers to come down and flip and re-install correctly.

Rick Castillo and crew, Pat & Tyron dismantled and rotated door swinging outward, correctly like it was supposed to be!

They examined the kitchen folding window and determined that not only did it need to be replaced with a six-panel window, folding outward, but it was the incorrect configuration for the opening. The correct window should have a “low profile” bottom which would match exactly the inside and outside granite counters. The one ordered and installed was raised about 3-4 inches. They also noted that the window was not “Cat-5” Hurricane glass windows like specified in original plans. They also took a look at the large glass door between the bathroom and outdoor shower, which has a 3-inch sill on the bottom that can easily be tripped over. They told us that door was also ordered incorrectly and should have been a flush bottom door. For now, we will deal with it. 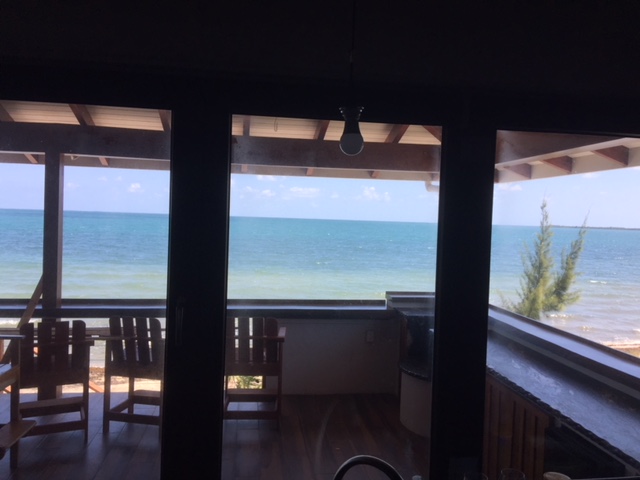 Hard to see, but look closely, if those three large windows opened inward, they would take out lights above and faucet.

We have ordered the correct window from Benny’s, and paid for it, the second time for this window. Well, at least when it is installed it will be correct this time

We also took overall ordering, installation, and payments for our wood countertops and cabinets, as well as all the inside and outside granite. As those are all in their finality of building and installation, I will hold off on pictures of those for the next issue of this blog. Stay tuned because they are beautiful beyond belief. I will tell you that all our granite is being designed and installed by A.L. Construction Limited here in Maya Beach. All our wood counters and cabinets are being created and installed by an excellent woodworker, Conrad Lewis in Hopkins, Belize. If you decide to build here on the Placencia Peninsula, you should take a look at what this artist does. 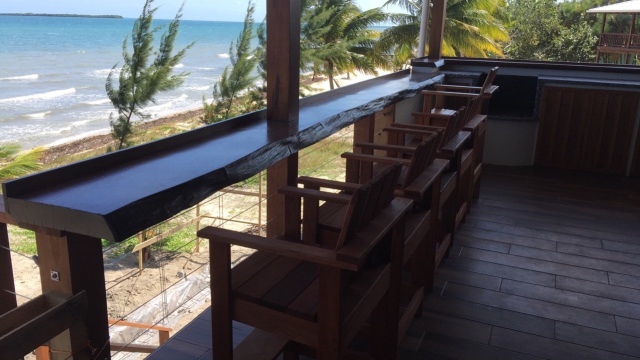 A “little taste” of whats to come. This is the 17 foot, 18 inch wide counter Conrad made for me.

On a brighter note, our new Belizean Contractor has completed the final plumbing and electric inside the house, and we have “final approval” from our Bank Manager at Atlantic International Bank. There are still some minor things, like most of the light fixtures that will arrive in our ocean shipping container next week. Yippee!

Now for the additions, a new garage under the house, and a “security/dog area wall” on the side of the house.

As we just purchased a brand new Izuzu D-Max truck a couple weeks ago, it quickly became obvious that parking it all night every night on the sea, would turn it into a “rust bucket” within a year or two. Therefore we decided to build a garage for the new baby. At the same time, we decided to have our Belizean Contractor build a short wall along the side of the house and around the back staircase. This would allow the dogs free access to a major space and keep little Oliver from running to Alaska.

As you might remember the plan was to have a pier built off our beach for our new boat. After over a year our previous contractor was unable to obtain a building permit for the pier, so we decided to use that money and have our new contractors build the garage and wall. 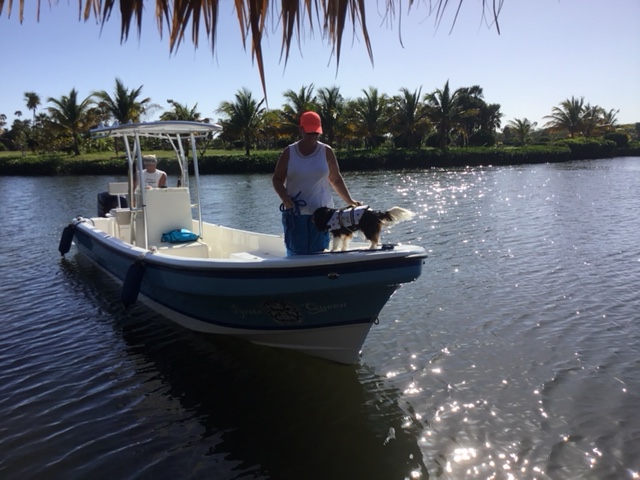 Coming home to port, with my honey Marsha and “little Oliver”.

So you see. some things do work out quite well. Even when you think everything is going well, there’s usually something not. Being “on-site” during the building of your new home in Belize is like I always say, extremely important. I have been here the entire time, with the exception of three weeks over the past year and a half. And still, things happened that I didn’t see until it was too late. Your choice of who oversees the building of your house is of the utmost importance, Ordering the correct major parts for your house is also extremely important, and seeing that they are installed correctly too. I will go into this more in the first chapter of my new book, which is based on this blog, publishing by the end of 2018.

Until the next post, and pretty much-finished interior, I leave you with one thought, it’s all about “no worries” here in Belize. At least at some point, I hope.